Ex-Super Eagles player, Obafemi Martins has debunked CDQ’s claim that he was involved in a brawl with Burna Boy’s men at a club.

Obafemi Martins took to his verified Instagram page on the 3rd of March 2021 to notify fans that there was a misunderstanding between himself and those from Burna Boy’s camp but the matter has been resolved.

He also said that he wasn’t happy with seeing their names (CDQ inclusive) being disgraced in such a manner.

According to him, the club (Bayrock) wasn’t even open therefore no fight happened there. The post; 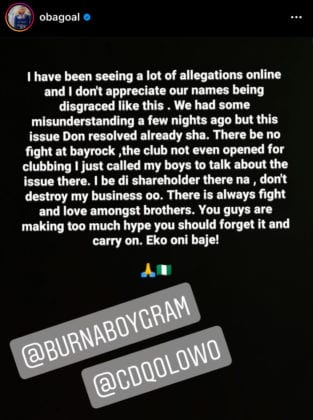 It can be recalled that CDQ called out Burna Boy and his boys via a tweet on the 1st of March 2021 claiming that Burna boy’s crew disrespected Obafemi Martins and he demanded an apology from the Odogwu.