Following the CCTV footage showing Baba Ijesha touching the foster daughter of comedienne Princess, a man took to social media to accuse him of defiling an 8-year-old girl in Oshodi.

Reacting to the trending molestation saga, an Instagram user identified as Heryinksbaby advised Nollywood actress Iyabo Oyo not to give up on the matter but rather make sure justice is served.

He made more shocking revelations while commenting on the actress’ post.

Heryinksbaby who described Baba Ijesha as a “Human-like animal” revealed that he cannot change as he was also caught defiling an 8 year old girl while he was staying in Mafoluku Oshodi. 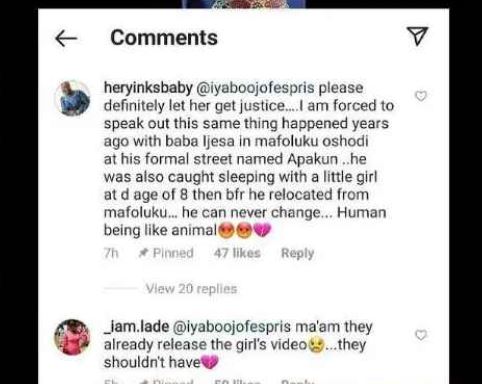 Business Owner Arrested For Illegally Connecting His 21 Fridges To Streetlight