Popular Instagram comedienne, Taaooma has reacted to allegations by a Nigerian film maker that she didn’t meet the client’s expectation after collecting N1.5million for a skit.

Recall that the film maker with Twitter username @Olaondeck alleged that a client paid the content creator the sum of N1.5million naira to shoot a short video for his brand, but the client didn’t like the work on completion.

Ola further alleged that after the client complained about the video to Taaooma, her stance was “Take it or leave it”.

Taaooma has released an official statement addressing the allegations. She stated that the allegations are false, misleading and purported to defame her character.

She further revealed that legal actions are already underway to seek redress against the man identified as Mr. Olashile Owolabi.

Read her full statement shared on her Instastory below:- 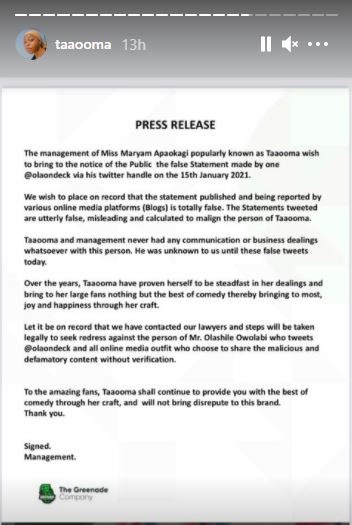