Nigerians have attacked a movie producer, Adebayo Tijani for allegedly sleeping with a lady in order to give her a movie role.

This comes after an Instagram user identified as @Feyi1 made the allegation against the popular movie producer on social media.

According to @Feyi1, Adebayo Tijani promised to give her movie roles to boost her acting career and this led to him ‘raping’ her.

Speaking further, she said the movie producer gave her Sexually transmitted infection, adding that he is very dirty, smelly and shapeless. 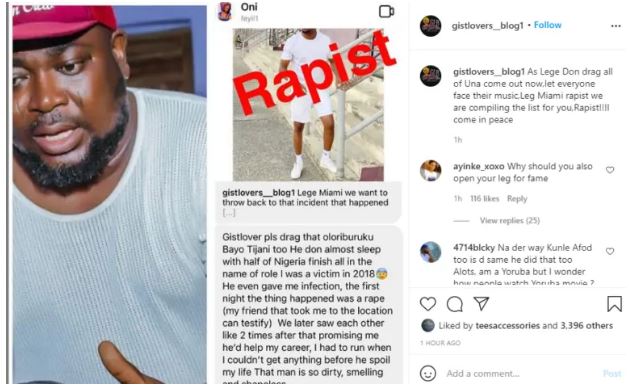 “Gistlover, please drag that Oloriburuku Bayo Tijani too… He don almost sleep with half of Nigeria finish… all in the name of role. I was a victim in 2018… He even gave me infection, the first night the thing happened was a rape (My friend that took me to the location can testify) we later saw each other like 2 times after that promising me he’d help my career, I had to run when I couldn’t get anything before he spoil my life… That man is so dirty, smelling and shapeless”

@4714blcky wrote “Na der way Kunle Afod too is d same he did that too Alots, am a Yoruba but I wonder how people watch Yoruba movie? They are always acting rubbish gonna d days when Yoruba film make sense, the most common thing now is if those Yoruba olosho girls have 200k these producers will use it to produce a film for them and use dem for lead role person wey never act before ooo Rubbish”

@1oluwaseye wrote “This girl no get shame .. did he force you before he had sex with you .. you agree to it because you want a role .. shame to both of you”

@tesleemraji wrote “Still don’t understand why men can’t be fair to ladies in the entertainment industry..must you propose sex before you help? Chai”

“Mr She Tell Me Say, You Better Go And Sleep” – Rapper Oladips Blasts Wizkid After Saying Rap Is Dead And Boring (Video)