Opeyemi Flagen, the boyfriend of Nollywood actress, Nkechi Blessing has shown his support for her following her suspension from the Nollywood industry.

We reported yesterday that the National body of Theatre Arts and Motion Pictures Practitioners Association of Nigeria suspended Nkechi Blessing due to her clash with Kehinde Adams better known as Lege Miami on social media over the arrest of embattled actor, Baba Ijesha.

Opeyemi Flagen took to his Instagram story to urge Nkechi Blessing to keep her head up, believe in her herself, speak up and never allow anyone to silence her not even him, her boyfriend.

The letter was re-posted by Nkechi Blessing on her Instagram story and revealed that the message is the only support she needed. 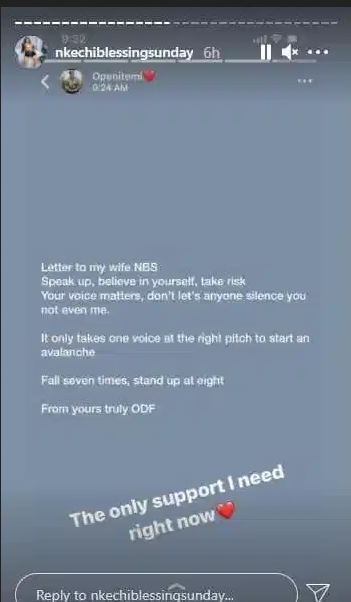 “Mr She Tell Me Say, You Better Go And Sleep” – Rapper Oladips Blasts Wizkid After Saying Rap Is Dead And Boring (Video)