A lady who claims to be a former roommate of big brother Naija housemate, Wathoni, has confirmed her pregnancy story.

According to Akua on Twitter, Wathoni’s story is a fact and it’s wild but she can still remember when it happened. she went further to tell people to stop judging her without knowing facts.

“Wathoni ‘s story is facts though. She was my roommate and it legit happened. Can still remember it like it was yesterday. It’s wild, but it happened. So y’all should not judge without knowing facts. #bbnaija”

Recall that Wathoni narrated how she got pregnant as a virgin at the age of 23.

In the video, which was filmed in April 2019, the mother of one revealed that she had a romantic moment with her lover during which he rubbed his manhood on her vagina and he then ejaculated, even though he did not penetrate her. 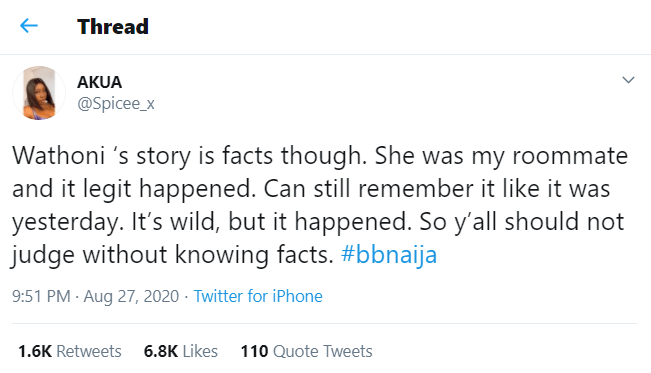 Popular Twitter Influencer, Shola Calls For Release Of Man Who tweeted that Buhari Should be Eliminated, NIGERIANS REACT!!!

Eat and drink but you see that guy on your profile, he will not marry you” fan trolls Temi Otedola