You could graduate from Harvard University or bag a Ph.D. from MIT, and rise to become the managing director of the World Bank who wins the heart of 164 countries to be voted WTO DG and still be primarily described as a “66-year-old Nigerian grandmother”.

While Okonjo-Iweala is indeed a grandmother and a 66-year-old, describing her as such after such a major appointment has led to a heavy backlash on and off social media. 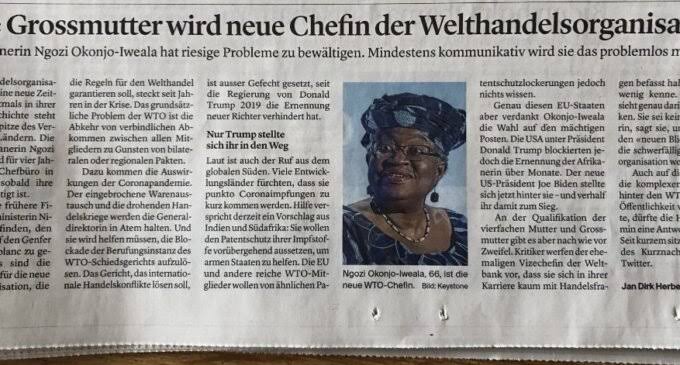 The reportage from this section of the Swiss media has been referred to as an expression of racism and gender discrimination.

“This Grandmother will become the new boss of WTO,” the headline of a report by Luzerner Zeitung read, announcing Okonjo-Iweala’s selection as the director-general.

Linda Klare-Repnik, the coordinator environmental and social management system, at the International Union for Conservation of Nature, called the newspaper out on Linkedin.

“Gender discrimination and racism: Swiss newspaper headlines the nomination of Ngozi Okonjo-Iweala for WTO Director General as ‘This Grandmother will become the new boss of WTO,” she wrote.

“If it had been a white man, the title would have been along the lines of ‘Harvard Economist, ex-World Bank Managing Director and ex Minister of Finance …’

Nadja Schnetzler, who co-founded a Swiss magazine called Republik, asked how the reporter would have written the election of Joe Biden as American president.

“What would you think if you wrote about Biden ‘this grandfather will be US President’?” she tweeted.

“Nigerian Ngozi Okonjo-Iweala is the first woman to head the World Trade Organization. We presented the 66-year-old economist and former World Bank deputy head in a portrait and focused on her role as a grandmother in the title. That was wrong,” the newspaper tweeted, after the backlash.

“Okonjo-Iweala is much more than that. For example, Harvard economist, as you can read in our text,” the newspaper added, sharing an updated version of the article.

A Ugandan-born academic and development economist in Germany highlighted that the same media would refer to Angela Merkel, who is also 66 as mother, but refer to Okonjo-Iweala as a grandmother.

Okonjo-Iweala has a Bachelor’s in economics from Harvard University and a Ph.D. in regional economics and development from the Massachusetts Institute of Technology (MIT). She also holds honourary degrees from over a dozen universities globally.

She was a two-time minister of finance in Nigeria and minister of foreign affairs. She is the first female to take up both jobs.

She is a board member at Twitter, Standard Chartered Bank, and African Risk Capacity. The 66-year-old was up till February 2021, the co-chair of the Global Commission for the Economy and Climate.

She won the global finance minister of the year 2005 by Euromoney. She was one of the top 100 most influential people in the World for 2014 by TIME Magazine.

She holds some of the highest national honours from Nigeria, Liberia, and Cote d’Ivoire.